Hey y’all!! Today I thought I’d share with you some of my absolute favorite series! These are books I will absolutely NEVER part with and will reread over and over again! 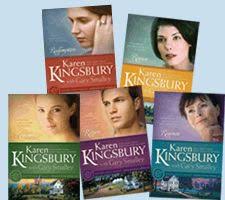 I fell in love with this series in college when a friend introduced me to Karen Kingsbury. The series follows the Baxter’s and all the triumph and tragedies that arise in their life.

Here is a little synopsis of the first book, Redemption!

When Kari Baxter Jacobs finds out that her husband is involved in an adulterous relationship and wants a divorce, she decides she will love him and remain faithful to her marriage at all costs.

This book shows how God can redeem seemingly hopeless relationships, and it illustrates one key message: Love is a decision.

I’m super excited because this series is set to become a TV series!

Next, we have the Harry Potter series! I have read and reread this series too many times to count!

It’s so easy to get lost in the world of Harry Potter. If you haven’t read this series, what are you waiting for?? It’s so much fun to read!

Here’s a little synopsis from the first book, Harry Potter and the Sorcerer’s Stone

Harry Potter’s life is miserable. His parents are dead and he’s stuck with his heartless relatives, who force him to live in a tiny closet under the stairs. But his fortune changes when he receives a letter that tells him the truth about himself: he’s a wizard. A mysterious visitor rescues him from his relatives and takes him to his new home, Hogwarts School of Witchcraft and Wizardry.

After a lifetime of bottling up his magical powers, Harry finally feels like a normal kid. But even within the Wizarding community, he is special. He is the boy who lived: the only person to have ever survived a killing curse inflicted by the evil Lord Voldemort, who launched a brutal takeover of the Wizarding world, only to vanish after failing to kill Harry.

Though Harry’s first year at Hogwarts is the best of his life, not everything is perfect. There is a dangerous secret object hidden within the castle walls, and Harry believes it’s his responsibility to prevent it from falling into evil hands. But doing so will bring him into contact with forces more terrifying than he ever could have imagined.

The Hunger Games is such a great read.

This is another series I devoured in several days. I even got my mom hooked on this series.

And it was just announced that Suzanne Collins will be writing a PREQUEL to this series! I can’t wait to read it!

A little synopsis of the first book:

Could you survive on your own, in the wild, with everyone out to make sure you don’t live to see the morning?

In the ruins of a place once known as North America lies the nation of Panem, a shining Capitol surrounded by twelve outlying districts. The Capitol is harsh and cruel and keeps the districts in line by forcing them all to send one boy and one girl between the ages of twelve and eighteen to participate in the annual Hunger Games, a fight to the death on live TV. Sixteen-year-old Katniss Everdeen, who lives alone with her mother and younger sister, regards it as a death sentence when she is forced to represent her district in the Games. But Katniss has been close to dead before – and survival, for her, is second nature. Without really meaning to, she becomes a contender. But if she is to win, she will have to start making choices that weigh survival against humanity and life against love.

What are some of your favorite series to read over and over again?